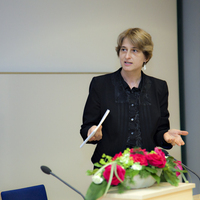 I studied literary and cultural theory and obtained my PhD in English from Lancaster University, U.K., after which I completed "habilitation" (dr. habil.) in Literary and Cultural Studies at Szeged University, Hungary. I also studied Gender Studies in a non-degree postgraduate programme at Central European University in Budapest Hungary, and hold an undergraduate degree (“Magistra”) in sports studies and English from Charles University in Prague, Czech Republic. I write mainly on late state-socialist Czech cultural issues and published, among others, in Signs, Slavic Review, East European Politics and Societies and Cultures, Europe-Asia Studies, Men & Masculinities and Aspasia.

Areas of interest for PhD supervision:

I welcome qualitative research projects in the sociology and cultural representations of gender and sociology of culture, particularly those, but not exclusively, that relate to my research interests.


Thursday 11-12 (book appointment by email) and by agreement;
outside of the teaching weeks virtually